And yet another quick update

As I said in my last blog, I have been busy inside the hold, painting, creosoting, making shelves etc. so I just thought I would add a couple of photo’s.  I would have put some on last night but I have been having a few problems.  Last month Dawn bought herself a new iPhone 4.  Her old phone is a HTC and as it is less than a year old and cost nearly £300 and she was only offered £80 in part exchange she said did I want her old phone.  As it had a camera and my old Nokia was a bit of a brick! I jumped at the offer (bad move) it is a touch screen phone and does all sorts of fancy things, not that I will ever use them, but when you have fingers like sausages like me then the phone develops a mind of its own.  I have been taking photos of the work I’ve been doing each night then coming home, connecting it to my computer which has the decided to clear the memory on the phone’s gallery every time.  Dawn said it was me doing something but last night I asked her to download them and it still did it so she sat for the next two hours fiddling and returning it to factory settings, whatever that is, and hey presto tonight it has worked so here are a couple of shots I have taken just to keep you all up to speed. 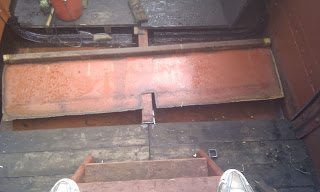 The stank is out. 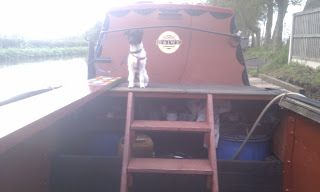 Scruff keeping guard and a close eye on the proceedings. 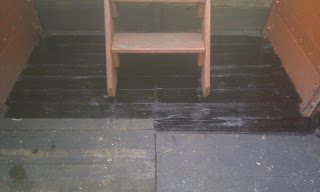 The rear shuts fitted back in place and freshly creosoted. 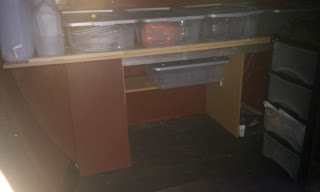 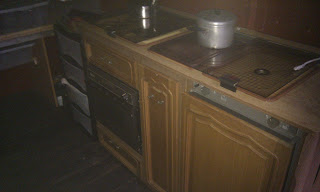 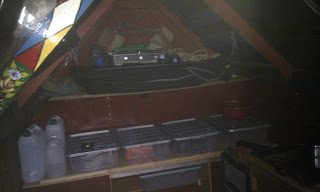 New shelf for the top cloths and ropes etc.
When I came to re lay the shuts that had been raised for the stank to be cut out, there was a slight problem which I had not noticed before.  The shuts behind the stank were about an inch lower than those in front so first thing I had to do was to saw some blocks of wood the same thickness as the difference in height and nail then to the bottom of the shut bearers to raise them up.  With that done I was able to relay all the shuts and creosote the last two then put the grand staircase back in position.  By this time it was after eight and I was getting hungry, not having anything to eat all day, so I packed everything away and headed off to the best chippy in the world, next to Crown Bridge in Armitage for two cod and chips and a pot of mushy peas, then home.  We have got the two granddaughters this week end so I probably won’t get much work done and you watch I bet its glorious sun shine all week end.  Oh well never mind there’s always next week so until then
Don’t bang ‘em about
Blossom.
Posted by Blossom at 15:02