Chuckin arras, (Throwing arrows) required a 2’-0” length of bamboo cane (pinched out the garden) a 3” oval nail, a 10 cigarette packet, stickey tape, a 2’-0” length of string and your trusty pocket knife.  Push the head of the oval nail up the one end of the cane leaving about half showing then tape into position.  Now sharpen the point on the pavement concrete Use pocket knife to split other end of cane into four splits about 3” long.  Rip the front & back panel out of the cigarette packet and slide them into the cane end splits (like dart flights) leaving about 1” of the cane protruding.  Hold four splits together and wrap in stickey tape.  Tie a double knot in one end of the string – job done.  Knot end of string wrapped round shank of arrow just below the flights then loop the string over itself to trap the knot (works similar to ‘thumblining’ bottom gates open) Wrap other end of string around fore finger of throwing hand so that the string is just short of the length of the arrow shaft.  Hold arrow shaft like throwing a dart with the string held taught to the knot.  Lean back with arm outstretched behind you and throw the arrow Loose the arrow at the ultimate point and off it is launched.  Used for aiming at targets, garage/shed door, tree etc. or to see who could throw theirs the furthest distance or the most dangerous who could throw theirs the highest (don’t forget they come back down)
Bombers, Two matching bolts and a nut (about 1/4 “) a box of mothers kitchen matches.  The nut is screwed half on the end of one of the bolts, the head of a match is shaved off with your pocket knife and put into the end of the nut.  The second bolt is fastened in the opposite side of the nut and tightened, trapping the match head between the two bolts.  The ‘bomber’ is then thrown at a hard object like the wall, road and pavement causing the match head to explode with a very loud bang and usually blowing the ‘bomber’ apart.  After finding all the parts the ‘bomber’ would be re armed and used again and again.
May I, a player is " it" and they stand on one pavement, whilst the rest line up on the pavement opposite. The person who is ‘it’ shouts to the others, one at a time, what is shouted makes them do different actions, that will move them across the road and toward the other side of the road.  When given a command, you must remember to ask "May I", if you don’t you have to go back to the start. The first person to reach the person who is ‘it’ wins and becomes ‘it’ for the next game. The commands used were: Pigeon Steps, Bunny Hops, Cartwheels, Watering Cans, Lampposts, Giant Steps, Rolley Polley's. Most of these are obvious, pigeon steps – small steps, bunny hops – hop like a bunny, cartwheels – cartwheels, but a couple may need explaining.
A Watering Can is where the player spits as far ahead as they can and then moves to the spot where their "gob" landed. A Lamp-Post is an action in which the player lies down on their front, reaching out their arms ahead as far as possible. Then stands on the spot to which they reached. And a Rolley Polley is simply a forward roll. The commands may contain multiples such as 3 bunny hops or 2 lampposts etc. Or even a mixture “do a bunny hop and a lamp-post" And don’t forget the reverse tactic such as "Take 3 Bunny Hops and 6 backward pigeon steps! A licence for all sorts of mayhem and fights.! 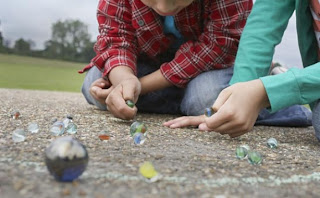 Marbles, games played with marbles were varied and numerous but some things were common.  Marbles came in two types and two materials.  You had glassen (glass) marbles and ironies (steel balls out of large ball bearings) and the two sizes were a normal playing marble was about 15mm diameter, while a larger aiming marble known as a fobber was about 20 -25 mm diameter some people would not  play against lads who had ‘an iron fobber’ for fear of them breaking their glassen marbles.  Follaron marbles, (Follow on) First player rolled their marble off as far and in whatever direction.  The second player then tried to roll their marble to hit their opponents.  If they did they won that marble if they missed the first player had a choice of either rolling away again or they could turn and try to hit their opponents marble.  I have known this game go from one end of our street and back again many times.
Killer marbles, There was another game played with marbles called killer which involved digging several small hollows out on a patch of dirt and throwing marbles in various of the hollows but for the life of me I can’t remember the details, boo hoo. I still have a little bag of glassen marbles somewhere, can’t find them though (So it’s true, I really have lost my marbles!)
British Bull Dogs, Ip dip a poor soul to be "it" they stand in the middle of the road.  All the rest line up against the garden wall.  When the person who is ‘it’ shouts "Bulldogs" everyone rushes head-long for the opposite wall on the far side of the street.  The person who is "it" has to try and stop one of the players and lift them off the ground.  If they succeed, the player caught joins the catcher in the middle.  As more players are caught and lifted off the floor, the number of catchers increases as the players dwindle away, until one is left, the winner.  Obviously this game can get a little rough with fight regularly breaking out.  As you can see from the above games, they bred tough kids in The Black country, as well as any areas where these sort of street games were played and the other point worth noting (parents of small children approaching Christmas) they cost nothing!  I am sure that most kids of today, if you tried to get them to play these games you would just receive a blank look, for if it isn’t hand held electronic has all singing and dancing lights, bells and whistles and the only exercise is through your two thumbs, then they would show no interest at all, and besides you would probably be stopped by mamby pamby rules of ‘non-competitive sports only’ ‘encourages violence’ etc. etc. instead of good old character building learning to be competitive in life, wanting to be a winner. Ok ok rant over,  well that’s it again, a bit of a long one but until next time .
Don’t bang ‘em about
Blossom.
Posted by Blossom at 14:18