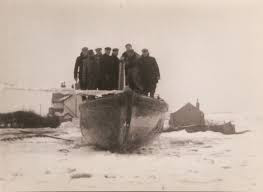 Finally at the beginning of March 1963 the thaw had started.  Gradually the snow, which by now was mainly ice on footpaths/towpaths/roads etc. had started to retreat.  Within a week the snow/ice had all gone but what it left behind would be with us forever.  Never again did I see anywhere near the amount of traffic I had seen prior to the big freeze.  I think that many had found other arrangements when the canals let them down for 12 weeks and never returned after the thaw.  The freeze alone cannot be singularly blamed for the demise but it was a contributory factor.  The clean air act of 1956 had a dramatic effect on the coal trade as from 1956 through to 1968 saw Pits closing all over the Black Country, 1956 West Cannock No 2, 1957 East Cannock, 1958      West Cannock No 1, 1959 Cannock Chase No 3, 1960 Hawkins, Brerton, 1962 Cannock Chase No 8, 1963 Wyrley No3, 1964 Coppice, 1967 Mid Cannock, 1969 Hilton Main. although if you speak to the old colliers they say there’s still plenty down there. These collieries served the canal either through ‘Edgefud (Hednesford) Basin known to boaters as ‘the bump’, Holly bank basin and Anglesey basin and on the BCN Sandwell Colliery chutes at Smethwick.  As well as the domestic supply they also supplied the power generation industries at Birchills (Walsall) power station, W’TON, .Ocker Hill Which all received their coal by canal at this time, this transferred to road and rail transport in the mid 1960’s
During the same period factories were going over to gas fired boilers, we were changing from town gas to natural gas, the M6 motorway was being built and all this together had a disastrous knock on effect on the canal trade, especially the BCN.   If we are not making town gas then we are not cooking coal, if we are not cooking coal we are not making creosote ( creosolic acid), coal tar, gas water and as the M6 was going straight through Thomas Claytons Oldbury site,  This company’s tar boats  finally went off the cut in 1966. Coal traffic to W’TON power station went off the canal in 1959, Birchills in 1965, Ocker Hill in 1966. 1963 saw Hednesford basin close, 1965 saw Hollybank basin go and 1967 saw Anglesey basin close.