On 31 May 1911, SS 401, Titanic,  slid down Slipway No. 3 at the Queen’s Yard of Harland & Wolff and settled on the waters of the Victoria Channel in Belfast Lough.  In her brief life she would be the largest vessel ever built.  Titanic had been built with some really super facilities and probably one of the finest was the Grand Staircases which were designed to be used only by first-class passengers. The fore Grand Staircase descended five levels down from the Boat Deck to the E Deck 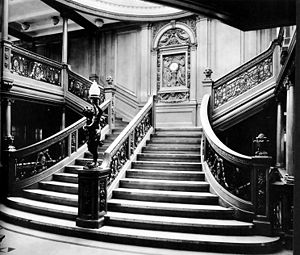 On 29 January 1937 Harland & Wolff delivered the Large Woolwich motor boat Darley to its owners the Grand Union Canal Carrying Company.  I thought to myself “if Titanic can have a grand staircase then so can Darley” And so it is now that the rich and gifted (well Dawn & Bruce) can make their grand entrance, down into the hold.  For the last 12 months, since we bought Darley we have been using a 6 foot length of aluminium scaffold ladder to gain access to and from the hold which, to be honest was not the best means and so it was time for action.  The prompt came in the form of the required materials which turned up at the mooring.  On Sunday 8th April, Dawn and I went down to Darley to do some work, Dawn to clean back cabin etc. and me to start painting the hold.  When we got there we noticed that some of the 3”x2” timbers we had on the back of the mooring ready for when we replace the decking (more on that later) was missing.  To ensure no more disappeared, we loaded them into Darley’s hold and counted them.  On arrival back down the mooring the following Saturday, Chris Shenton, who moors next to us, came running down and explained that Simon, someone who moors higher up, had borrowed seven lengths of our timber on the understanding he was going to replace them.  Chris offered to take me up to him, introduce him to me so he could tell me himself.  On the way up to Simon’s mooring Chris explained that Simon owned a scaffold company and that he would probably get me some scaffold boards for our decking.  After a half hour chat we returned back down the mooring to Darley and sure enough Simon came down with his wagon and offloaded about 12 full length scaffolding battens, with the promise of more.  Brilliant I thought now I can make The Grand Staircase.  So I have spent the last three days/evenings dodging the rain and sawing, screwing and painting and here is the end result. 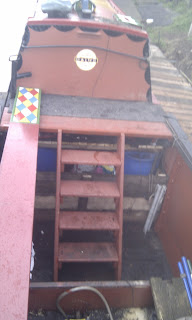 New, extended back end boards and a new set of strong steps into the hold.  Next time I will blog about what the rest of the scaffold battens have been used for, so till then,
Don’t bang ‘em about,
Blossom.
Posted by Blossom at 09:58