As I mentioned in the last blog,  We have made a start on the moorings.  One of the dangers of our mooring since we first moved here has been the poor condition of the decking  which obviously has been down for a good many years and was completely rotten, in fact it has been true to say that the only thing stopping you going through it has been the heavy duty rubber sheeting laid over the top spreading the load.  This can be clearly seen on The first two photos. 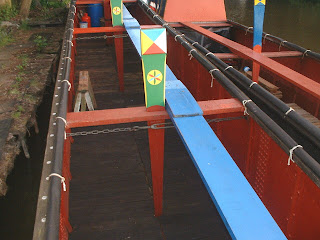 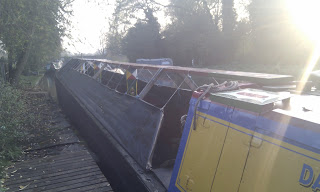 The section to just in front of The engine ‘ole was repaired last summer with some timbers I had left over from making the new shuts and was laid over the top of the existing rotten boards.  It has been our intention to replace the whole lot ever since we moved here but our biggest problem has been sourcing reasonably priced second hand scaffolding battens.  I have been on the lookout for the last year but they have always been either too expensive or collection only and too far away, averaging between £6 & £12 each board and and we need over 100 boards!  As I had already said in the last post, Simon, who had borrowed some of my 3” x 2” supports, brought some old scaffold battens down to our mooring on the Sunday and Chris Shenton and myself had been talking about how we were going to re board the decking etc. He said he would probably pop down in the week and make a start and that we would need some 4” nails and some long cable ties to fix the bearers to the scaffolding under frame.  After work on the Tuesday I called into Wickes and purchased 100 plastic cable ties and 4 bulk boxes of 4” nails, then popped down the mooring to put them in Chris’ bow stank.  God bless him I say for when I got there I was greeted by ‘no decking.  He had already ripped out all the old decking and supports and stacked all the old rotten timber at the back of the mooring ready for recycling. 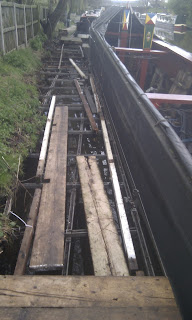 The following Saturday (the 14th), we were both down the mooring quite early and we made a start sawing up the battens into 4‘0” lengths, By late afternoon we had sawed all the full length battens up and managed to produce 30 usable lengths which we loosely laid on top of the bearers that had been cable tied to the framework.  By this time it was 2.00pm and I had to leave as we were having the two granddaughters over this afternoon to take them to the circus.  I did not go down on the Monday but went down on the Tuesday after work and again to be met with all the boards we had cut on the Saturday, Chris had been down and laid and nailed them during The daytime. 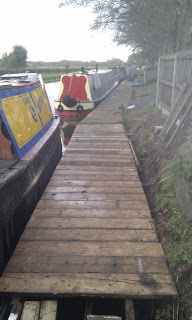 And so there you are, the first 25 foot of our new decking is down and solid and sheer luxury, just the ability to step on and off Darley without the fear of going through is brilliant.  We are now just waiting on Simon to come up with more battens and we can complete the Job.  So in future when we are returning to our mooring on Darley we won’t have to worry so much if we,
Bang it about.
Blossom.
Posted by Blossom at 13:20