Well it’s been a right busy fortnight with lots of boating, lots of chatting and catching up and just a small amount of alcohol (he he).  On Saturday 19th, we drove down to Darley at Alvecote and put our things in the back cabin and then by 6.30pm retired to the Samuel Barlow for pre-birthday drinks with the crowd.  After an hour three boats set off from Alvecote in convoy to The Bull at Polesworth. David Goode took the lead with his newly acquired Josher Ling with Karen Parrott as crew, followed by Darley with Dawn and I as crew and with Matt Parrott being given the honour of steering (well it was his birthday)  The convoy was being supported from the rear by little Woolwich motor Auriga.  The drinks flowed, the fun began and everyone seemed to be having a great time especially Matt as he went through the various stages of excessive drinking.  First the happy stage where he was really enjoying the company, then the second stage as he ’loved’ everybody telling them but mainly Spuggy s repeating again and again “I love you Spuggy” while playfully slapping Spuggy round the cheeks.  Then the final stage, which was mainly played out in the gents where he just wanted to die!  Sunday morning saw some of us heading down to Dusty’s café for a mega breakfast.  Suitably refreshed we headed back to Alvecote where we were leaving Darley for the week.  A couple of evenings we drove down to Alvecote just to do a few jobs in preparation for the fourth coming rally season.  Friday after work, I was going to drive down to Darley and start back, but a midweek phone call off David Ray inviting us to his birthday on Friday night saw us driving up to the Junction Inn at Norbury for the festivities.  I volunteered to be driver and so drank coke all night, returning home about midnight and stopping off at the chippy for a supper of curry and chips.  With this consumed I put my stuff in the car and bade farewell to dawn and headed off down to Darley.  I arrived at Alvecote at about 1.30am and so was aware of the need to be quiet.  I had left the keys for Darley with Lawrence Williams at the weekend so he could fill her tanks up with diesel for me during the week.  As he needed to move Darley from outside the Barlow down to the yard where he would leave her, or so I thought.  I parked very quietly on the pub car park and walked back up the lane, across the canal bridge and back down the towpath on the opposite side to the yard.  When I got there, Darley was nowhere to be seen, Just a line of moored boats, so I proceeded to quietly pass about six moored boats and still no sign.  Strange I thought and wondered if he had put here in the yard or the marina and so I walked back up the cut back to the yard.  No she was not in the yard basin and I could not see her in the marina, but looking back down the canal, there she was, moored outside the pub where I had left her last week.  Bless you Lawrence he had filled her up and moved her back.  By 4.00am Saturday morning I was up and ready to go but it was not quite light enough until 4.30am when I fired up the Petter and was off.  By 10.30am I was making the turn at Fradley only to spend the next hour and a half to get above Shadehouse lock waiting for the numb nutts to bugger about with half paddles.  By 4.00pm on the Saturday afternoon I finally tied Darley back up at her mooring at Great Haywood after a 12 hour trip with about eight of those boating in absolute baking heat.  The factor 20 cream I had put on my head had meted completely and it looked and felt as if I had poured chip oil on my head!  Sunday I went down to Darley to sort out the cloths on the cratch.  As some of you will know I run Darley with the top cloths up from the deck board to the mast and under this Dawn has her little ‘galley’.  Since I bought Darley the side cloths have never been right at the bows all saggy and buckled and I thought it was because they needed tying up properly.  So on Sunday I set about this half hour job which ended up taking most of the day.  When once I had taken the top cloth off and put new strings on the side cloths I began to tie them back up but they were as saggy/buckled as before and on closer examination, it was due to the side cloths not being fitted correctly.  Side cloths, when tied up, should run straight from end to end along the top edge, in other words as the bows sweep up the cloths become narrower.  That is when they are fitted correctly, Darley’s followed the hull side at a parallel width and this is what was the problem.  So I untied them and then set about removing the strips fixing them to the gunnels.  After this I repositioned them and re-attached the strips.  With the side cloths now fitted correctly, I proceeded to wash them all down, including the top cloth.  With this done, I proceeded to fit the top cloths the finally the cotton rockets, which had been removed prior to the start of the winter. 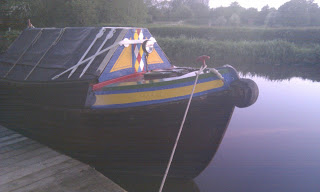 I have been down to Darley every night after work doing all the little jobs, cleaning, painting etc. in readiness for this coming weekend show at Etruria which both Dawn and I are really looking forward to. Well Darley is now ready and we will be travelling up on Thursday/Friday so if you see me on my way give me a wave, shout ‘how do’ but don’t bang ‘em about
Blossom
Posted by Blossom at 15:26