ADVERTISING IN THE FIFTIES & SIXTIES

I’ve started so I’ll finish.  Now I’m on a roll as far as the idyllic life in the 1950’s – 60’s when all was innocent.  Not really I’m sure, it just seemed that way but as always we tend to look back and only remember the good times/things and push to the back of our minds the bad things like no central heating which meant getting into a freezing cold bed at night and getting out of a warm bed into a freezing cold room in a morning, sat in front of a lovely coal fire watching the flames flickering, but forgetting that our fronts would burn while our backs would be cold from the drafts through the non-double glazed windows.  But enough I hear you say, get on with it.  I can clearly remember our first television, a huge thing with a tiny screen and as well as the programs, I clearly remember there must not have been enough programmes to fill the whole day and so there would be long gaps between the programmes which would be filled with ‘intervals, short films of such exciting things as ‘a kitten playing with a ball of wool’ or ‘the potter’s wheel’ being two I can vividly remember, 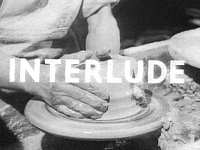 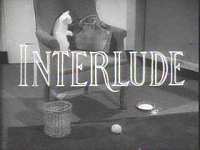 but the best one was ‘from London to Brighton in 4 minutes’ by steam train.  Then of cause there were the adverts, and these were before fair trading or advertising standards so advertisers could and did claim all sorts of non-sense such as Craven A cigarettes which stated “will not burn your throat” So I thought I would again perhaps prompt a few memories with the following.  Fruit gums,“Rowntres fruit gums yum yum yum, six fruity flavours for my tum, don’t forget the fruit gums mum”. 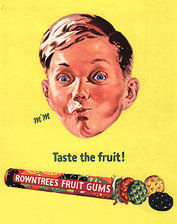 Rowntrees were made to change this ‘jingle’ for it was felt that it put too much pressure on mums, so they changed it to “don’t forget the fruit gums chum” but this never caught on.  As kids I remember we used to chant “fruit gums fruit gums yum yum yum, six fruity flavours up your bum” (snigger, snigger) - Murray mints, “Murray mints, Murray mints, the too good to hurry mints”. - Pepsodent tooth paste, “You’ll wonder where the yellow went, when you brush your teeth with Pepsodent”. - Esso blue paraffin, “Bum, bum, bum, bum, Esso blue”.

Coates cider, “Ohhhhh, Coates comes up from Summerset, where the cider apples grow”. – Polo, “The mint with the hole” the TV advert I remember most for Polo showed a flying saucer. 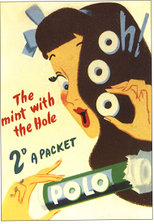 Rael Brook shirts, the advert was of animated shirts dancing with the lyric “Rael Brook, Rael Brook, the shirts you don’t iron”.  Who could forget the Brook Bond PG Tips chimpanzees tea party. - Horlicks malted milk drink which claimed to help you sleep “Horlicks, the drink of the night”. 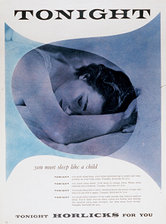 Robertsons jam, “Look for the golly, the golly on the jar”. - Omo washing powder, “Omo adds brightness to cleaness and whiteness”. 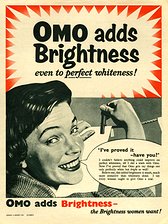 How true it was I don't know but bored women were said to put a box of Omo in the window when their husband was at work to signify Old Man Out! - Daz washing powder “Daz washes so white you can see the difference”. The White knights advert showed knights on white horses who would travel round giving away five pounds to housewives who showed them a packet of Daz. – Strand cigarettes, “your never alone with a strand” this slogan cost them dearly as the advert showed a guy in a raincoat standing in the shadows of a dark alley, sales plummeted due to the scary advert 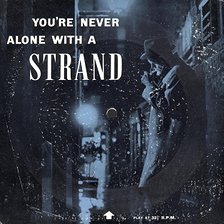 Fry’s Turkish delight, “From the fabulous east comes this wonderful feast, Fry’s Turkish delight” displayed by a group of young women dressed in belly dancers costumes. – Mars Bar, “A mars a day helps you work, rest and play” (but they never told you about the rotten teeth and obesity) - Fry’s five boys chocolate bar, “Five girls want five boys” in today’s lifestyles this advert would have a totally different meaning!

And just to end on how about, Barrs Irn Bru, “Made in Scotland from girders” – Tizer, “The appetiser”. - Jubbly orange drink (better frozen) the catch phrase was “Lovely Jubbly” before Del boy as well. – Well there you go that’s it, so to leave you with “tell em about the honey mommy”  so till next time,
Don’t bang ‘em about
Blossom.
Posted by Blossom at 14:07