I don’t think anything looks nicer than a properly dressed back cabin with all its brass, lace and especially hanging up plates.

Many people have said to me that they don’t like them because they rattle and ‘ching’ (not if they are hung correctly) So that brings me on to today’s chosen subject (background Mastermind Music) that of decorating a traditional back cabin. (You will note: back cabin – not boatman’s cabin as that’s a modernism

Quite a lot of people with both ex working and modern ‘traditional’ boats have plates hanging in their cabins, but how many actually know how to hang them in a back cabin, and while I do not profess to be any sort of expert, I feel that I did learn from one back in the 1970’s when I was decking out the then, new back cabin of my large Woolwich butty Bingley.

Like many, I tied a loop of white ‘knicker elastic’ through the top of three or four of the slots in the chosen plate, decided where I wanted to hang it, and screwed a small brass cup hook in that position then hung the plate on it. Next a second plate would be hung in the same manner on another cup hook, then, when all plates were in position, they would be tied to each other with further pieces of ‘knicker elastic. ( Or something similar) The result was untidy, random, had no order to it and left large areas of cabin sides showing. 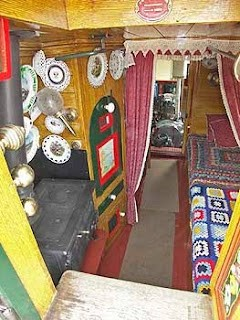 One evening whilst sat in the back cabin of Bingley on our moorings at Tipton we heard a boat approaching from under the bridge ‘ole, both myself and Clive and Pat Stevens came out of our respective cabin hatches, to see that it was Roger and Jean Hatchard with Keith Christie’s josher motorboat Lynx and their small Woolwich butty Hyades. At this time the moorings were shared by myself with Bingley, Cliff Sherwood’s small Northwich motorboat Belatrix, his blue top butty Lynne ( being converted to a motor and a trip boat) Clive & Pat Steven’s pair of large Woolwich’s Battersea and Barnes, Keith Christie’s Josher Lynx, Glyn & Rose Phillip’s small Woolwich motor Aquarius as well as a steam dredger and a small iron iceboat.
Roger and Jean had come over to stop for a couple of days visiting Pat and Clive Naturally, they were invited over to their butty cabin of the evening, along with myself we spent the evening chatting about ‘boaty things’ and consuming several pots of tea. During the conversation the topic of hanging up plates sarcastically came up. Straight away Roger stated “Jean will show you if you want” and so the next night the lesson began. This involved the purchase of a ball of white cotton string and green plastic coated gardening wire.

I thought I would share with you how I was shown to hang both plates and the lace in between them. This method can apply anywhere in a back cabin but I am describing the section of cabin side behind the range.
Start by sorting your plates into groups, types, size etc. have a good idea in your mind how you want to lay them out. See how many plates it will take to go across the area you are covering, then how many rows it will take from top to bottom of cabin side. In the case below five plates in a row and three rows 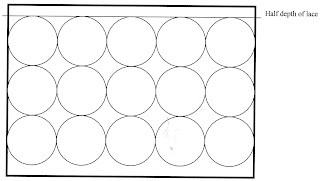 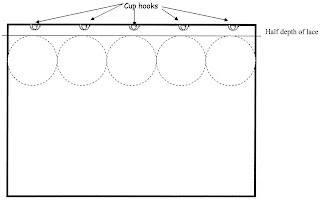 Start with the bottom row first and hang each plate in turn with a length of string through the ribbon slots, ensure each string length is identical so the plates are all in a line. Then tie each plate to each other with short pieces of string going between the ribbon slots. At this point the row of plates will probably hang away from your cabin sides, don’t worry this will be fixed later. Then fix two more cup hooks at each end, above the bottom row of plates and at a height above the row of plates equal to half the depth of your lace. As shown below 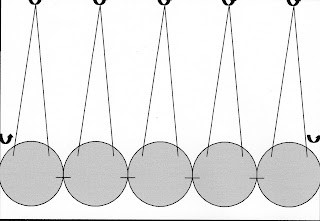 Now form a loop with a pencil in the end of the gardening wire and loop it over the one side cup hook.  Now stretch the wire across the front of the plates/strings across to the other side cup hook, and twist it round the cup hook then cut it off with snips.

And now to the lace. Start by tying a loop in each end of a length of string equal to the exact length between the two side cup hooks (remember this string has to be tight between the hooks. When you have this right (after a bit of practice probably) thread the string in and out of the top of the length of lace you have cut. Now put the string loops over the cup hooks. As shown below 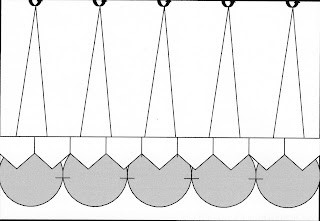 The tight wire behind the top edge of the lace holds all the plates back close to the cabin sides, while the string holds the lace.. The process is now repeated with the next row up being tied back to the same cup hooks at the top. As shown below 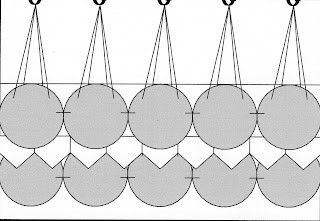 This is then followed by two more cup hooks and another line of wire and stringed lace. As shown below. 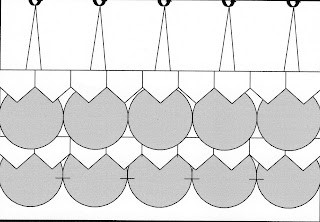 And finally the top row is fitted in the same manner and the finished panel is as set out below. 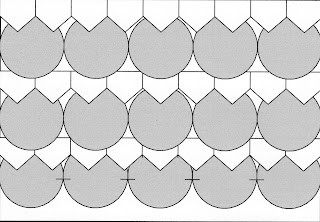 Well that’s all folks, just to finish off here is a couple of photos of inside my back cabin and her anging up plates. 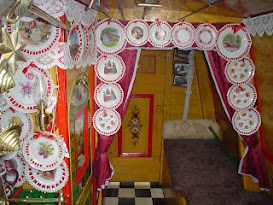 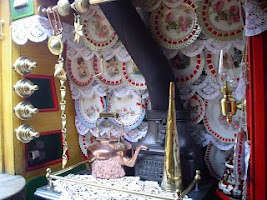