COAL BOATING WITH THE BOYS

At just after 8.00am on Saturday I got up and prepared for another day doing jobs around the house.  Dawn has this agreement, I don’t, but Dawn does, which consists of: I can spend loads of time on the boat during the summer, but when it comes to this time of the year I am supposed to catch up with all those little jobs that need doing at home.  Simple straightforward jobs like fitting a new central heating boiler- building cupboard around said boiler- ripping up carpet in said room-stripping wallpaper-repaper/paint----you know the rest girls, curtains ornaments bed clothes etc.  I had just put all my painting/decorating clothes on when Dawn came in to me and said "Mike Askin has just put on Faceache he has just gone past the bridge at the bottom of our garden.  What he had actually put was “Wake up you old fart! :) — with James Bills at Blossom's Bridge”  Dawn says if you want to go with them for the day I’ll drop you off to meet them before I go to work.  Nuff said quick change of clothes and she was driving me off to find them.  We drove off following the canal away from Rugeley looking over bridges etc. but to no avail, so I phoned Mikey to see where he was and his reply was “ just going through the narrows just out of Rugeley.  That will be the narrows at Crown Bridge, I thought, as that’s the only set of narrows out of Rugeley and so off we went to bridge 57, Royles Bridge which is about 5 minutes from Crown Bridge.  Dawn stopped in the car, as she only had her slippers and PJ’s on and I stood on the parapet of the bridge.  The ten minutes came and went and so did another ten minutes and then I suddenly thought ‘I wonder if Mikes meant where the canal goes quite narrow between the railway bridge and  bridge 59, Kents Bridge.  So I got back in the car and Dawn drove round to Old road and I got out and looked up the cut but still no sign. Drive me back to Crown Bridge and l’ll text him.  ‘Where are you Mikey’  ‘At bridge 60, another 20 minutes away yet.  At this point Dawn had to go back to get ready for work leaving me at Crown bridge to wait for the boys.  Soon the imposing sight of Mikeys ‘Royalty’ GU boat, Victoria, was coming round the Handsacre turn and into the bridge ‘ole where I jumped on ready for a day out with the boys, coal boating. 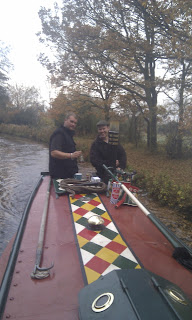 My first question when I got aboard was to Mikey “what narrows were you on about when I asked where you were?”  His reply was “there’s only one narrows out of Rugeley, you know just before that bridge, where that pub is!”  I asked him if he meant the Ash Tree his reply was “no the next one down”. I then questioned, “You mean the Plumb Pudding” “Yes that’s the one”  “Mikey” I said “that’s not a narrows, that’s Armitage tunnel”!!!!  The one thing I hate about boating this time of year is the leaves on and in the cut. 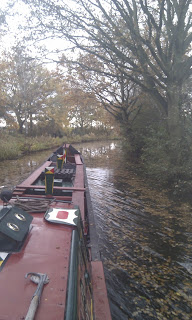 With a loaded boat it’s no different having to throw it astern every five minutes to clear the blades of their ball of leaves.  With Victoria being loaded with about 16 tons of various bagged coal and 2000litres of diesel, she was drawing about 3’ 3” at the counter and about 3’ at the bows, the result of this was that forward progress was quite slow and anything faster than just tick over just drew all the water and sat her on the bottom.  Well as a guide, last year I took Darley from Great Haywood to Alvecote single handed in about 10 ½ hours whereas today’s jolly from Rugeley town moorings (2 ½ hours less) to Alvecote took us about 9 ½ hours!  When once I was settled and we were underway I said to Mikey “where’s your brasso, your brasses are dirty”  Mikey tried to say he had done them yesterday (I don’t think) and so I set about polishing, Mikey disappeared in the back cabin and made a cup of tea, while Jay steered.  Tea made and we were treated to jam doughnuts as were plodded along the pound past Kings Bromley and arrived at Woodend lock, where, me and Mikey worked the boat down while Jay steered.  Luckily a boat was waiting below so we were able to jump for the pound down to shadehouse, where again me and Mikey worked the lock with me drawing and Mikey shutting the top gate.  When the lock emptied, we opened bottom gates and Victoria pulled out then we closed up behind him and we were off down the pound to Middle lock where we undertook the same routine.  When the lock emptied and the gates were opened, Mikey said I could get back on the boat and he would close the gates and walk down to the junction to open the little swing bridge.  I proceeded to cross the tail of the lock via the little wooden foot bridge and Mikey said “there’s steps that side Blossom, why did you not use them, I thought you would have known that!” my reply was simple” I never get off the boat Mikey, Dawn does all the locks”.  We soon made the turn at the junction and there were only two people standing outside the swan to watch.  As we swung round Wazza shouted over “What you jumped ship Blossom” seeing me on a different boat, I just turned back and smiled at him and gave him the ‘one for your dog’. In just over the hour we were approaching Streethay bridge 86 where I think I have moaned before about the state of the cut at this point as you pass the rear of a converted farm house/outbuildings and some mobile homes, and sure enough the engine started to labour as it stirred up the chocolate pudding throwing a column of rotting leaves out from the counter.  With that cleared we plodded down the straight to Streethay wharf, which seemed very quiet apart from someone in the painting tunnel rollering his cabin top.  As we made the turn at the end of the straight, a boat was just winding and as we slid past him he shouted across “How much is your coal” “Between £7.50 and £10.00” was the reply “why do you want some” 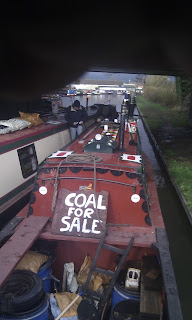 And so we pulled over under Kings Orchard railway bridge and waited for him to wind and pull alongside.  Six bags were soon transferred to his cabin top and we were off again.  Within half hour we were tying up at Huddlesford Junction where Mikey’s mom and dad had their caravan while they blacked their boat at Lichfield cruising clubs yard. 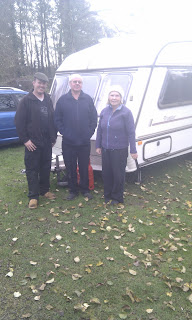 We were invited round for a cup of tea , a ham sandwich and a slice of fruit cake.  With this consumed we were off again as we still had a few hours boating left.  As we came through Hopwas, Jay jumped off armed with a pocket full of business cards and walked the towpath posting cards in every moored boat. 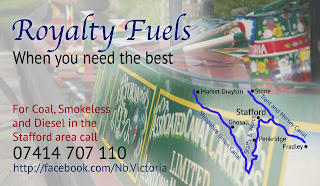 He kept this practice up all past Fazeley Junction even as the light was fading, posting cards and telling people about the coal service.  We came across the Junction and through the narrow bridge ‘ole where there were several moored boats on the towpath and a line of thick conifers on the offside behind the industrial units.  Half way past these conifers, there was also a tree with low branches and as we past Mikey grabbed one of the lowest branches and snapped it off to get rid of it.  As he did so, a second low branch took Mikey’s hat off and deposited it into the cut.  Mike chucked the JP into astern and we then continued for a further boats length before Victoria stopped.  “What you doing Mikey”.  “ I’m going back for me hat”. 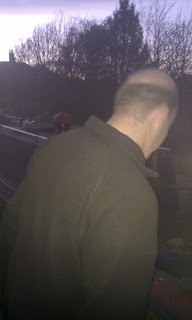 As we reversed back, Victoria did what a lot of boats do in astern, the back end veered across the canal and into the conifers.  Mikey knocked it out of gear and lifted the cabin shaft, which he poked through the conifers, out of sight and on to what he thought was the bank.  He braced himself with a foot against the counter cants and proceeded to push.  The boat started to move, but so did whatever the shaft was resting on.  The rest was down to gravity and in a split second, Mikey was making a perfect forward dive with half pike, worthy of a gold medal at the recent Olympics!  Jay, who was still on the towpath shouted “Blossom, get your phone, take a picture”  By this point I was fighting back guffaws of laughter as the tears rolled down my cheeks.  As Mikey stood up in freezing water up to his chest, he put his hand in his pocket and removed his now failed I phone which he slammed down on the counter and for the next 60 seconds just shouted “Bast**d, Bast**d, bast**d.  I turned the tiller round towards him and he climbed back up it onto the counter. By now, as we realised he was unhurt, apart from pride, both Jay and I were both engulfed in uncontrollable laughter, in fact for the next couple of hours we would only have to look at each other and again burst into laughter to the point that by the time we reached Alvecote, my ribs were aching.  By now it was completely dark and we made the rest of the trip by headlight.  We were soon up Glascote two and on the final leg of the journey.  As we passed Amington road bridge, the smell of fish and chips was wafting over the canal from the chippy just off the bridge which reminded me that by now I was hungry, cold and had run out of cigarettes, and had no money with me (as I had left in quite an unprepared hurry this morning).  Frequently through the day Dawn had been texing me asking where we were and I had kept her up to speed with our progress.  She had asked earlier where we were heading for and I had told her Alvecote to which she asked me to text her when I got there and so I agreed to tell her when we were ½ hour away, and so I text her at Old Tamworth bridge and half hour later we were tying up at the layby at Alvecote.  Earlier in the day Mikey’s mom & dad had arranged to meet them there and they were all going for a carvery at The Pretty Pigs.  They soon turned up and they all climbed in the dad’s car and were off.  They asked if I wanted to go but I declined as Dawn would be here in about 10 minutes.  So off they went leaving me to go and stand on Victoria’s counter to wait for Dawn.  And wait I did for nearly two hours while unbeknown to me she had a shower and got herself ready to go out, but perhaps more of that another time.  All in all a very pleasant days boating in pleasant company and really good entertainment, so until next time,
Don’t splash ‘em about
Blossom