CLOTHING UP A NARROWBOAT

As I said in yesterday’s blog, clothing up Darley for the Winter made me think I should write a blog on how to cloth up a working boat, so here it is.
Before I even start, and before anybody contradicts what I write, I will point out that there is not just one way to cloth up a working boat as boatmen often had their own little ways that were individual so what follows is the way I was taught.  Right first things first and before we can even consider clothing up a working boat, a good understanding of the various bits and pieces is essential. Traditionally a working narrowboat would have carried a full set of cloths as well as all the running gear, which would have consisted of several individual types of cloths including: Deck cloth, Cratch cloth, side cloths, top cloths and a Tippet.  Along with this would be all the timber works, categorised as running gear including crossbeams, boxmast, topmast, 2 stands, deck board, false cratch and uprights Nowadays many working boats have dispensed with some of the cloths and only use side and top cloths as well as some of the rope work used such as girding strings..
RUNNING GEAR
Cross beams – Three lengths of timber the width of the hold which divide the hold into four ‘rooms’
Boxmast –  A wooden ‘box’ about 8” square and 7-8ft long which is used to support the top planks and the towing mast which fits into a recess cut into the mast beam.
Topmast  The towing mast which slots inside the boxmast and is adjustable to vary the height (loaded/empty)
Stand – A tapered timber about 7-8ft in length and 8” wide used to support the top planks
The cratch – The name given to the whole of the tent like structure at the front of the hold consisting of the deck board, the false cratch and the cratch boards.
Deck board – The triangular timber board that supports the front end of the top planks and is to stop the ingress of water into the hold when locking.
False cratch – A timber three piece ‘A’ frame which supports the top planks between the deck board and the boxmast.
Cratch boards – Short straight pieces of timber which joint the false cratch to the deck board, making the whole assembly more rigid.
Uprights. – Straight lengths of timber which have a vee cut into each end and fit diagonally over the inside of the gunnel and the underside of the top planks, again holding and supporting the top planks in a rigid manner. (I have heard some call these quarters)
CLOTHS
Deck cloth – A triangular cloth fixed to the deck beam by a strip of timber forming the same shape as the deck board but larger
Cratch cloth – (This was a later addition becoming popular in the 1950’s onwards especially with the midlands to south coal traffic)the same width as a top cloth but only about 5foot in length and was used to permanently cover the cratch never being taken down and with no need to cloth the cargo up being coal.
Side cloth – Two cloths about a yard wide and running the whole length of the hold.  Fixed to each side of the hold along the gunnel by means of a strip of timber and having reinforced brass eyelets along its top edge at about every yard. One side has lengths of rope called side strings spliced into each of the eyelets.
Top cloth – Three or four rectangular cloths the width being from gunnel to gunnel over the top planks.  The length of them to cover the whole length of the hold plus enough for an overlap at each joint.
Tippet – A narrow strip the length of the hold, just wider than the top planks which ends in a triangular section. When used it is laid in top of the top planks with the triangular section butting up to the edge of the deck board.  Its purpose is to protect the top cloths from wear and tear from walking up and down and also from chaffing from the top strings.
FIXINGS
Along each gunnel, starting from the engine ‘ole bulk head, are metal rings about 1 .5” diameter held in place by metal staples and fitted at 36” centres. There is one ring stapled near the outside top edge of the gunnel and one on the underside of the gunnel directly underneath.  Working 36” centres from the back end should leave the last pitch, by the cratch, about 32”.  A ring is positioned at the very end, one at 16” and a second at 32” these are for securing the decorative hose and rockets.
ROPE WORK
Knee strings. (Used to secure the side cloths when not in use and rolled up on top of the gunnel)
Short lengths of 8 -10 mm rope about 18” long, with a loop sliced in one end and a back splice on the other and fixed to the staple under the gunnel 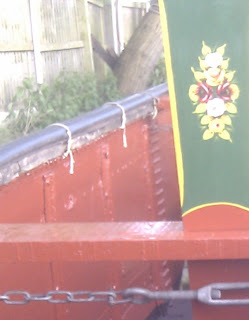 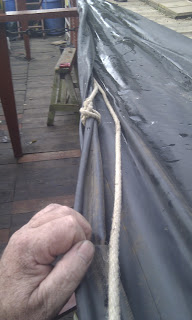 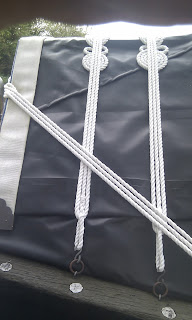 Girding strings Lengths of 12mm diameter line used for securing the top plank on top of the stands by lashing them to the cross beams
Hose  (Used to decorate the cratch)
A length of rubberised cotton fire hose (getting hard to find nowadays) approximately 6ft in length with metal clasps and a spring fitted to each end, to secure it to the boat.
METHOD.
For the purpose of this I will assume that the boat’s running gear is all assembled and in position including beams, mast, stands, uprights and cratch. 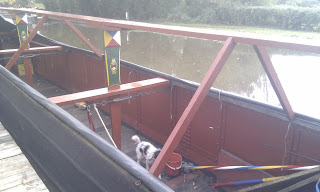 Start by ensuring the tippet and top cloths are out of the hold somewhere accessible.  Undo all the knee strings to release both sets of side cloths and unroll them.
Side cloths.
Throw the side strings across the top of the top planks to the other side. 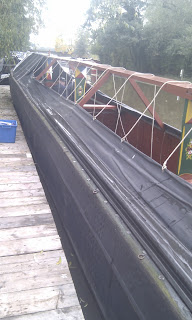 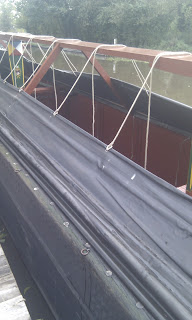 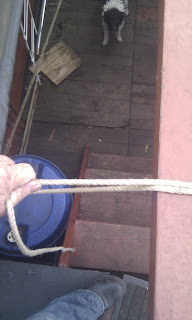 Pass end under the single strand. 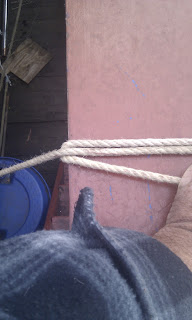 Pass end across to other side (with two strands) and pass end under. 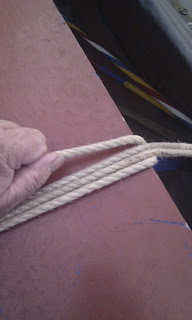 Pass end back to opposite side and under and finish off on side with two strands. 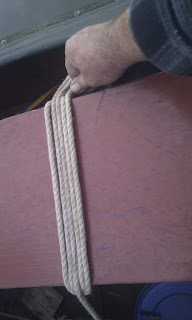 Pass one bite round the two strands, and hold tightly in position . 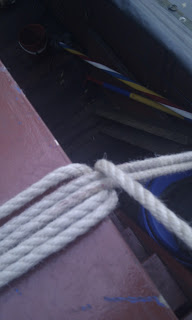 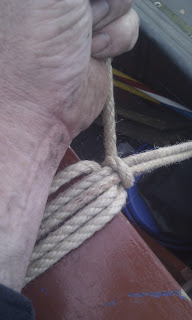 While holding the bight tightly in position  use other hand pull centre of remaining string between the two strands to form a loop. 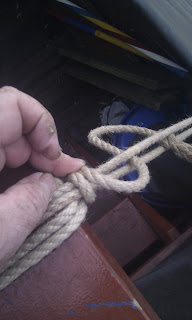 Pull loop up tight against the bite 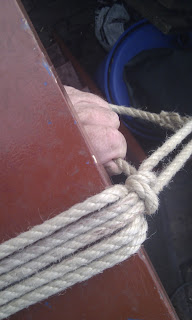 Pull string through from between two strands until end splice is trapped and a neat loop is formed. 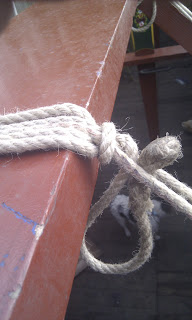 Move along top plank to next side string and continue until all side strings are tied and the side cloths are taught. 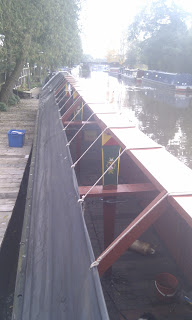 (Incidentally, the method of moving along a plank by sitting on it and pendulating your bum along, instead of walking along it, due to uncertainty or alcohol, was know by boatmen as ‘Frogging the plank’.
Top Cloths & Tippet
Starting from the back end lay the back top cloth out and adjust position to equal it out, then moving forward lay each top cloth out so it overlaps the previous cloth to give a waterproof joint to the hold, finishing off with the front cloth which has a square hole cut in it to go over the top mast.  Position triangular end of tippet in line with front edge of deck board and roll out along the length of the top cloths.

The triangular end of the tippet can be clearly seen in this photo
Hook the S hook into the ring on the one side gunnel and throw the remainder over to the other side.
Pass end through the opposite ring the throw back over to other side.
Repeat for all top strings.
Sitting /kneeling on top plank as for side cloths pull alternatively on each side to tighten top string.
Pass end of top string underneath the side string and pull tight across top of cloths, then pass under side string on opposite side then back again. Finish off on side with two strands then tie off end of top string in exactly the same way for side strings. 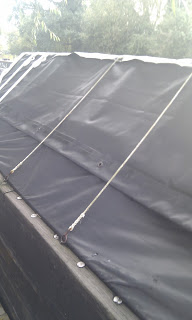 So that’s  it apart from fitting the decorative rockets and hose on the cratch which I will perhaps cover in another blog
So until then
Don’t bang ‘em about
Blossom.
Posted by Blossom at 11:43