1st-2nd.Sept Not a lot to say about Shackerstone really apart from the crawl up the muddy Moira cut.  It was getting dark as we made the turn at Marston Junction but I carried on until it was getting too hairy.  As both sides of the cut are edged with tall reeds it is difficult to tell by headlight which way the cut turns in the distance so by the time we got between bridges 11 and 12 I just pulled Darley over on to the mud and that’s where we stopped for the night.  We carried on the next morning at 8.00am and soon arrived at Shackerstone where we tied in our usual spot  between the aqueduct and the village bridge, and later Paul and Viv joined us on Whitby by the Friday. 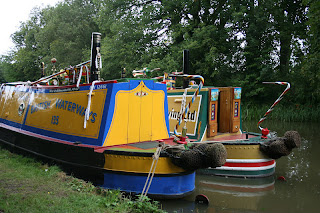 The usual steam train ride, beer in the beer tent, evenings in the Rising Sun, daytime walking round the stalls and watching the sheep racing and duck herding. 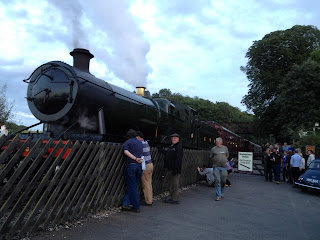 After Shackerston we decided that instead of returning Darley to Great Haywood, as we had originally planned, we would leave her at Alvecote for the week and go up to windmill End by the back route up the B’ham & Fazeley.  On the way back down the Moira cut, Just as we approached the water point at limekiln bridge, we picked up a right blade full which stopped the engine dead.  I drifted in to the bank and proceeded to poke about under the counter to discover a huge raft of reeds.  After 10mins further prodding we were off again heading off to Alvecote where we had left my car the week before, so with washing and dogs loaded we left darley and were off home for a hot shower and food.  Well after a week on the Moira we hadn't so much banged 'em about, more like squelched, slid, dredged 'em about!

Blossom
Posted by Blossom at 11:34