Well that’s it; all the shows of the year are over for us and now only the Winter to look forward to.  Got plenty of maintenance jobs to be getting on with though as well as quite a few jobs painting things with flowers and landscapes (roses & castles) for friends.  On getting home from work on the Thursday, we loaded the car and set off up to Stone for the end of season bonfire and hog roast courtesy of Roger and Teresa Fuller.  This weekend is made up of a collection of relations and close friends of the family with like minds in a lot of cases, working boats, steam engines, trains or just plain bonkers.  Some take their working boats to stay on while others are in camper vans and caravans and some just travel up by car for the day without stopping overnight.  Secured the dogs in the back cabin, stowed the food and clothes etc. then headed off down to The Star.  It was only drizzling as we set off but it got gradually worse as we walked on so that by the time we got to The Star it was absolutely hammering down and we were both soaked.  Drinks, meals and pudding then more drinks.  I can personally recommend The Star for the licensee Jamie & Lindsey keep an excellent house, the beers are kept perfect (real ales and fizzies), and the food is delicious and reasonable prices.  We sat chatting and still the rain hammered down.  At about 10.30pm Dawn said she was going to order a taxi back but the gaffer said “if you wait till I’ve finished, I’ll take you back”  and so he did, back up to the boat.  Next morning rose and did the brasses and blacked the range, after which we drove down to Aldi for a few essentials.  By 1.00pm Paul and Viv had arrived on Whitby and the rest of Friday afternoon was spent chatting, cleaning, polishing etc. apart from when Danny the horse arrived towing Ilford. 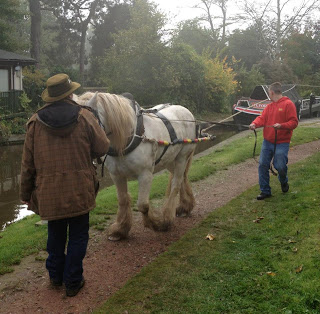 On Wednesday evening, at home I had made a gypsy stew and we had been cooking it all day on the range and so by 6.00pm it was ready and Paul, Viv, Dawn & I all piled into Darley’s back cabin for a feast fit for a king (and a couple of Princesses).  By 7.00pm we all set off up to the other pub close by, The Talbot where a warm welcome was made.  By 10.00pm the pub was full with a lot of the people from the Fuller Do and the chat was mainly canal related.  Half way through the night, Sue, someone to do with the steam engines that were coming was talking about brass and Andy, off Dove, told her, unbeknown to me that I loved polishing brass.  A little later she came over to me and said “are you Blossom” “Yes” I answered. “I hear you like brass” she asked “yes I do”  “How do you fancy coming over in the morning and help clean the brass on the steam engine”  “Yes OK then” was the alcohol fuelled reply.  We ordered our last drink about 12.30pm and by 1.00am we were tottering off back to the boats a little worse for wear in some cases.  We were sound asleep when, at 9.00am the boat began to rock and we were treated to bacon, egg and mushroom sarnies.  After breakfast I gave Darley’s brasses a clean and then walked over to the boatyard with me tin of brasso and polishing cloths.  In the yard I was confronted by a 1917 steam tractor, a steam roller and a showman’s engine as well as a half size steam roller.  Sue spotted me and introduced me to the boys, Roger and Jack telling them I was the person who had volunteered to polish the showman’s engine.  The next two hours were spent polishing any brass that was cool enough to polish interspersed with long stares at the three beasts gently, effortlessly turning over and the smell of steam, coal and hot oil.  I could quite easily be persuaded to take on one of these mighty gentle giants, that is until Roger explained the value of such engines starting at about £150k!  It was not until the evening, when they were all lit up with the lights of the showman’s engine, 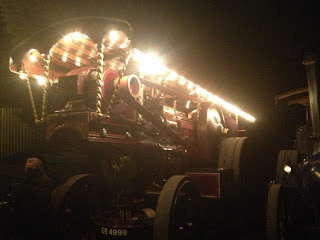 that I looked up and saw sign written along the top edge of the steam roller were the words F DIBNAH – STEEPLEJACK -BOLTON  that I turned to Andy Hoyle and said "is that Fred Dibnah's steam roller then" his reply was, " that's Freds ex wife and his two sons youv'e been talking to all weekend!". 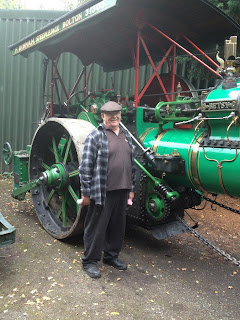 The week end was again a total success made up of the steam engines being in steam, a parade of working boats, demonstration of timber saws, train rides, bonfire, hog roast and of cause alcohol and chatting.  Finally a couple of things worthy of a mention.  Anyone who knows Andrew Hoyle, knows he’s a bit of a lad and always looking for practical jokes.  On the Saturday, he left his bicycle unattended so a couple of us raised it up and hid it on top of the crane. 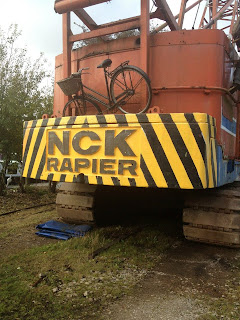 While on the boat parade he removed the Pigeon box and exhaust pipe off Ibex.  Him and Andrea were travelling round on the train and Dawn and Viv tried to soak them with the hose pipe, but they twigged their plot and got off the train at the other end of the boatyard, later Dawn and Viv got onto the pump truck and as they were going round, Andrew filled a bucket with sawdust and climbed the signal frame and as they passed underneath emptied the whole lot over them, much to the amusement of the crowd.  Overall, the party was a fitting end to a season of boating and shows but, for now, until next time that’s it.  Oh and don’t forget.
Don’t bang ‘em about.
Blossom
Posted by Blossom at 09:08