10 HORSING AROUND AT PARK HEAD.

(29-30Sept) Arrived home straight after work on the Wednesday, loaded car, and were off.  After unloading everything into the boat we walked down to the Victoria chippy in Owen street, Tipton (highly recommended) for a fresh roe and chips which we ate on the tables outside The Fountain before entering for a couple of pints before going to bed. 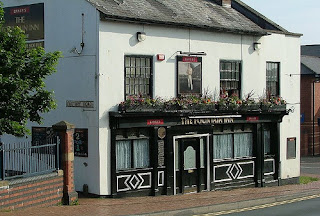 Off at 8.00am next morning for the trip round to Park Head. Once again we flew through the tunnel and then you hit it.  From Windmill End round to Park head though Blackbrook, where BWB used to have a dredging tip and so used to be quite deep, was a nightmare.  Every bridge ‘ole had it’s resident ‘washing machine’ and every few hundred yards meant chucking it astern to throw the plastic bags off the blades as well as the encroaching weed beds reducing the cut down to a single boats width.  Speaking to Vic Smallshire the previous week at Tipton show, we had been informed that we were to be moored in Jack’s arm.  For those of you who do not know the area, jack’s arm is a short arm that leads off Park Head Junction at the bottom of the locks.  There were three good reasons why we were not going to moor there, we would have left and gone home first. We have tied across Jack’s arm previously and it is infested with rats the size of cats! Which last time spent all night running across the boats. Secondly, for us to get off the boat meant crossing the gates of the bottom lock, not a problem for Dawn and I but there is no way we could get Bruce the Labrador across lock gates.  Could carry Scruff but Bruce weighs 8 stone.  The third and final reason was that we are very proud of Darley and we take her to shows for the public to see and to interact with them.  The show was in the tunnel pound above the 3 Park Head locks and there was no way the public were going to come all the way down the flight thencross the gates at the bottom lock then across to jack’s arm to see the boat.  On arrival I made the turn in the basin and entered the bottom lock.  As Darley came up in the lock we were greeted by old friends Cliff and Barbara Sherwood who I have known for nearly fifty years.  They were the assistant harbour masters for this weekends show and said I could moor on the towpath in the first pound as long as when the horse boat was performing we pushed over and tied on the offside next to their boat Bellatrix. 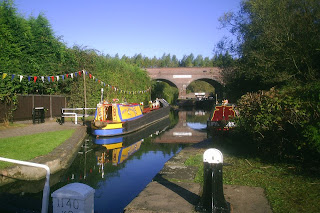 Perfect no problems with that, ideal spot to watch the hose boat go up and down. Friday tea time we had arranged to have a communal tea and so Chris Shenton, Ex boaters Johnny brooks, Henry & Phyllis Johnson and Dawn & I all assembled on Chris Shenton’s boat for tea which consisted of a gypsy stew and noggins of crusty bread which I had cooked in the week at home.  The Friday night was spent in the beer tent with Henry & Phyllis being entertained by two singers on acoustic guitars who were good and drinking Banks draft mild, the best was yet to come though with the Saturday entertainment being provided by Dr Busker & The Steam Fair Choir who are brilliant.  The more the evening went on, the bluer the band got. On the Saturday morning, at about 11.00am we pushed Darley over to the opposite side of the canal and tied next to Bellatrix. I then stood in the hatches to watch the fun.  On the Friday afternoon the horse had been walked up and down from the top basin to the bottom, several times to get it ‘used to the road’ and so at the due time it was hitched up to the ex-GWR railway boat ready to, as the tannoy announced, “show the public how it used to be done”. 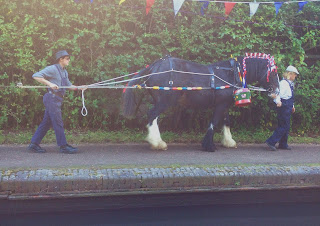 After the starting photo shoot everyone was cleared from the towpath and the horse leaned on the line.  Well what a joke- the mast pulled out and lay flat across the bows, the boat rubbed the guard iron all up the pound and then as the horse finally eased off the steerer got the boat very badly cross winded in the lock mouth.  I don’t profess to know a lot about ‘oss boatin, except what I had learnt as a youth with Caggy Stevens, but this was a fiasco and totally wrong.  Overall it was a really good show with over eighty boats in attendance and on top of that the weather was very kind. 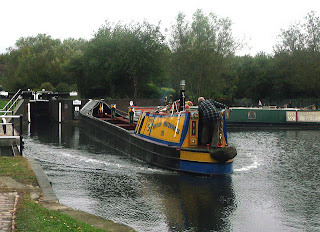 On the Sunday afternoon we dropped back down the bottom lock into the basin and were off round to Tipton for a night in the Pie factory with Henry & Phyllis, Chaddy (Kevin Chadwick) and Ann. John Blunn & Mavis. As we entered Netherton, I got ready for my usual charge through.  When I got 100yards into the tunnel, I thought ‘that headlight ain’t very bright’ that was because it was not working.  I chucked Darley aster and came back out to investigate.  Tried everything I knew to no avail, so I cut the cable just in front of the engine ‘ole bulkhead.  When the wires were flicked together there was a spark so I knew there was power to there.  I remover the plug off the headlight and tried it on the short cable where I had cut it, it worked and so I fixed the headlight onto the back end rail with electrical tape and headed into the darkness.  It was really bright and I could see every brick by the cabin but in front of the bow was pitch black!  Monday saw us all leaving Tipton at about 9.00am and heading off down ‘Ampton locks by about 11.00am John Blunn lead the way followed by us then Henry and bringing up the rear was Chaddy, with all of us drawing for each other.  We were making excellent time down the flight and would have been down in under three hours if we had not caught up with a Vikings Adrift half way down the flight who were that painfully slow that Mavis, who’s in her eighties, ended up drawing for them as well.  We got to the bottom lock and all said our farewells to John and Mavis as they were going back up the Shroppie while we were off on up the Stour cut. As we approached Gailey lock, a hire boat was just entering in front of us.  I dropped dawn off on the lock landings and she walked down.  On peering down into the now emptying lock, was told by the elderly gentlemen on the descending boat, “I used to work them forty years ago” pointing to Darley.  “Oh you might know the couple on the boat following us as they used to work the cut”  By this time Phyllis had arrived at the lockside and shouted down “hello George, hello Gladys.  Sure enough Henry and Phyllis knew them. George and Gladys Carter (nee Lapworth) used to work London boats(Grand union) and they knew Darley when she was on the Guinness with George Radford.  Quick arrangements were made and all three boats carried on together and we all tied up at The cross Keys for a meal and a pint or two.  The evening passed with many boatman tales being swopped like the day George’s brother fell in the cut and jumped out that quick he never even got his vest wet!  What a lovely couple they were, both in their eighties and still boating with their daughter and son.  A 9.00am start the next morning saw us back at the mooring and tied up as Henry & Phyllis passed by on their way back to their mooring at Weston.  All in all a really enjoyable few weeks and we never –
Banged ‘em about once
Blossom
Posted by Blossom at 11:07