This last week end we had a lovely gentle time travelling up to Stone.  On Friday we took both cars up to Stone and left my car there then gave Paul Barber a lift to Alvecote where Whitby was Saturday we left Great Haywood at 5.00pm after Dawn had finished work and tied up for the night at Weston.  After about an hour Whitby turned up and breasted up to us.  We all then retired to the Saracens Head for a nice meal and a drink. On returning to Darley Dawn took the dogs for their last walk while I put the bed down.  When she got back, Scruff decided to fall between the towpath and the counter.  The next ten minutes were spent rubbing him down with towels, having a curly/fluffy coat he dries quite easily though.  At about 6.00 the next morning, Scruff jumped up on the cross bed on top of Dawn and started to paw at the duvet. Dawn shouted at him to stop but instead he had an accident and pooed on her side, problem was he was very loose.  Needless to say within minutes we were up, dressed and the duvet had been stripped and black bagged in the hold ready to bring home for washing.  Whether it was something he ate or the dunking in cold cut water that had upset his stomach we don’t know.  The morning was quite cold and a very thick fog/mist shrouded the canal and we decided to wait until it cleared a bit 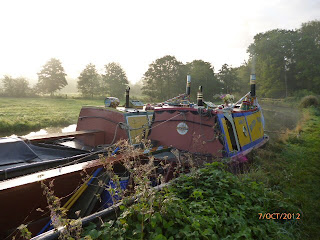 And so we proceeded with a jointly cooked breakfast of sausage, bacon, mushrooms, beans, cheesy mash followed by a late start by which time the earlier thick fog had cleared and been burnt off by the early morning sunshine and we had a pleasant trip in the sun shine up to stone.  British Waterways (I know it’s CRT, but it will always be British Waterways to me!) had finally finished the lock landings at Aston lock and very nice it looks to, except it’s no use nor ornament to working boats as you can’t get within about two foot of the bank, as I pulled in as there was a boat coming down, and graunch as Darley heeled over on the hard rocky bottom.  I just sat here and waited until the descending boat raised the paddles and used the flush to free her, well done CRT. 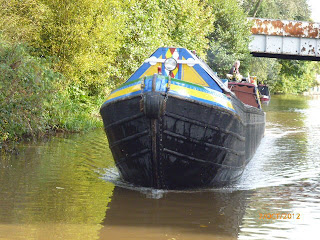 By the early afternoon we were heading up the stone locks and tied up opposite Roger Fullers yard.  A leisurely stroll back down the canal to the star where we had Sunday roast accompanied with a couple of pints and then back to the boats to pack everything away ready for driving home.  Well there you are, just one more week end away, ‘till next time
Don’t bang ‘em about
Blossom.