(22.08.12) Saturday morning and I went up to Darley and titivated  before setting off on the eventless journey to home. 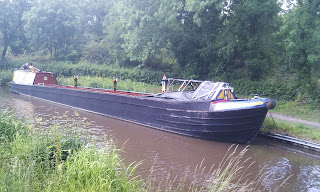 I tied Darley up opposite and locked her up and walked round to the house to collect boxes and bags ready for the next two weeks on the boat.  Dawn arrived from work and we set off about 5.00pm.  A couple of hours later we were dropping down middle lock at Fradley where we were greeted by Andrew & Andrea off Dove and an evening was arranged in the Swan. We were later joined by Roger & Teresa and Martin fuller.  Sunday we arrived at Glascote 2 with only three boats in front however it was still an hour before we reached the top. I hate the section from Fradley to bottom of Glascote as its shallow, full of crap and with lots of turns and narrow sections where people choose to moor.  We arrived at Alvecote by mid-day and turned into the marina and moored on an empty pontoon ready for the weekend’s fun, and oh boy was there to be some fun. 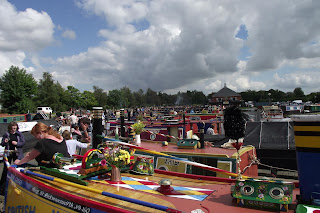 Later that afternoon some a friend of ours, Liz Rees, walked by carrying a wig which needless to say I could not resist the temptation as I have always fancied being a blond.  Too many people said it suited me for me to feel comfortable although it did come out again in the pub on the Saturday night 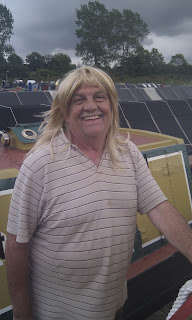 The Friday night saw us all being entertained by an irish folk band called Finnegans Wake and very good they were too.  On return to Darley we discovered that Mike Askey off Victoria had made the mistake of inviting Tom and James off coal boat Archimedes back for a drink along with Hairy Neil, Ian Blakelock-Rae  and Mikey’s girlfriend Michelle and J’s dog. When we got back to Darley we realised that we were not going to get any sleep for a while so, grabbing Guinness and wine we joined them. We stood on the counter but the rest were inside and by the time they had finished Mikey’s back cabin was a mess.  They lit his camper grill, cooked a whole pack of bacon and a loaf of bread, ate a box of apple pies, ate a box of cocoa pops and a box of weetabix minis.  What they hadn’t eaten was on the cabin floor.  At Audlem, we had bought some small water pistols to fire at Scruff, the new dog, to stop him yapping everytime Dawn got off the boat.  Needless to say they did get used to shoot other boat owners etc. as well.  Karen Parrot had threatened to get us back at Alvecote, so, in readiness, Dawn had bought a very large super soaker which was stolen off us by James and Tom off coal boat Archimedes as we passed each other on the boat parade.  They proceeded to soak Andrew off Dove as they passed them returning on the parade. The things got a little wet with olk filling buckets and handbowls with water to throw, all in good fun though. 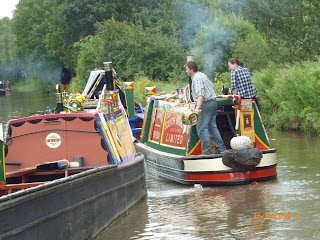 When Andrew got back to the marina he grabbed a galvanised bucket and hid behind a moored boat down by the lay by where returning boats winded.  As Archimedes returned he jumped onto the cabin top a threw a full bucket of water over them, followed by a further three buckets full.  This was countered by Tom setting off a powder extinguisher all over Andrew.  Great fun but it was not over yet!  Saturday night saw us all being entertained in the Samuel Barlow pub by ‘Signy’s’ band until the early hours.  Tom & J were still enjoying themselves when Andrew & Andrea left where he proceeded to untie Archimedes and push her out into the middle of the marina before retiring to bed.  When J & Tom returned they simply slept on two other boats leaving theirs drifting till morning.  Andrew on the other hand arose and shafted Dove back to her mooring then went back to sleep.  At about 3.30am J got up and repeated the prank, pushing dove out into the marina.   At dinnertime on the Sunday every body was making their way up to the Barlow to hear the result of the Les Lapworth Award presented for the best turned out working boat voted for by all historic working boat owners in attendance, and presented by his widow Alice. When the time came it was announced that “ the winner of the Les Lapworth award is” ---------------------------Darley.  You could have knocked me over with a feather. 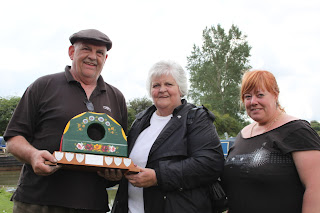 I went up the stairs to the balcony to be presented with the trophy by Alice then asked to say a few words which I will say again here, I don’t keep Darley the way I do to win any awards, it’s just the only way I have been taught and know, but it was good!  In all I think there was 55 historic/working boats attended and another great do was put on by Malcolm and the Alvecote tribe so once again many, many thanks, and till next time, don’t bang ‘em about.
Blossom
PS I will need to come up with something special for next years do!
Posted by Blossom at 10:51