We arrived up at Middlewich and after loading dogs, food and clothes on the boat, we took the car to park it on retired boater, Fred Bunn’s drive for the weekend.  Back to the boat and a short walk to the Boars Head for the boaters evening which was crap!  No music/entertainment, and £5.00 for a small bowl of hot pot with rock hard potatoes and one thin slice off a French stick.  Everybody was moaning as it would have been better to have got fish and chips from the chippy and drank our own beers on one of the boats, still we know for next year.  Saturday and we arose to rain and yet more rain.  Couldn’t do the outside brasses, and there was not many about so sat in back cabin doing all the inside brass. 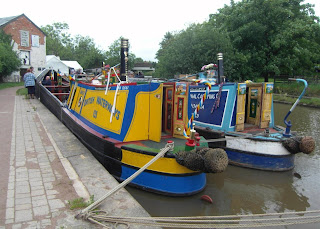 Working boats tied down in the town for the show included: On the town wharf, Saturn, Thea, Darley, Alton, Cactus, Sweden and Tench. The other side of town bridge were Thaxted, Whitby and Elizabeth.  Saturday night we went up to the White bear for a beer with Henry & Phyllis Johnson.  It was absolutely packed and really noisy.  A group of musicians gathered and started jamming in the pub but it was that noisy you could not hear them.  After an hour we decided to leave and move on the Kings arms, now there’s a strange pub.  Basically there are two rooms with a server in between.  On the one side it is ultra modern, minimalistic and full of youngsters, while the other side it is quite retro and set in 1950’s sort of style with dark wooden panelling and lots of ornaments and populated by more senior clientele. We first of all went in the modern room and were immediately accosted by a loud young woman about 30ish who told Dawn & Phillis she “ wasn’t at work tomorrow and was getting hammered and that she wanted a man’s dick”  Phyllis told her to keep her eyes off me and Henry as we was with them to which she came up to us at the bar and pointed two fingers at her eyes and then at us and said “I’m watching you” on return to Phyllis & Dawn, a very attractive young girl in a mini skirt walked into the pub and this same woman said to Dawn, “If I’d got a dick I’d be taking her home”  When once we were served we moved round into the other room! 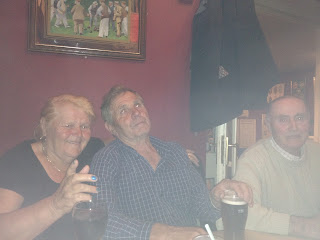 After sat chatting for a while we were joined by Fred Bunn, Viv Scragg and Paul Barber and had quite a good night chatting, drinking and laughing.  Sunday started as a much better day with the sun shining in between a couple of light showers.  This resulted in a lot more public about and also allowed me to do all the outside brass.  We packed all our stuff up at tea time and headed back home leaving Darley at Middlewich for the week. So till then
Don’t bang ‘em about.
Blossom.
Posted by Blossom at 13:54