(23-24 Sept)Always have a good week end at this show, I think it’s something to do with the people there, being back home so to speak, and a weekend of folks spaykin proppa.  When we left Darley there last week she was tied against the bank but when we got down to her the following weekend she had been moved and was tied outside another boat that was fully clothed up, which made it very difficult if not impossible to get the dogs on and off and even though we asked the owner to fold the last 2 foot of his cloths back to let us cross the back end boards he refused so the choice we had was to have both the dogs inside the back cabin all day and night for the whole weekend or find somewhere else to moor.  I was all for leaving but were persuaded by Chris Shenton and Joe Holinshead and so we moved and tied on the outside of the two tugs alongside their tug decks and spent the weekend shuffling back and forth each time we wanted to get the dogs out of the hold or into the back cabin at night. 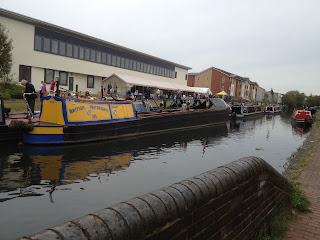 The show at Tipton is spread over two sites a short walk apart and separated by Owen street bridge with some of the boats moored on the off side in front of Coronation Gardens and the other half moored on both sides of the canal opposite the Neptune Health Centre.  A trip boat is operated from the towpath side taking passengers on a 30 minute trip. 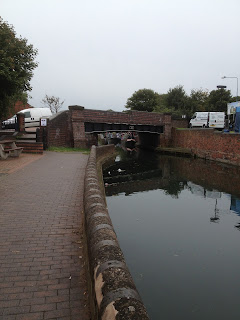 Spent the Friday night in the Fountain Inn having a good chin wag and drinks with friends.  Saturday morning and we arose to quite a pleasant day so I set about cleaning the brasses and Dawn cooked breakfast after which we went for a walk around the site and looked at all the stalls and stands.  On the Saturday night we had a drink and a lovely meal in The Fountain Inn with Henry and Phyllis Johnson. Sunday morning saw a change in the weather and the rain kept the crowds away.  We had breakfast in the medical centre then returned to the boats to start to pack things away and head off for home as we were leaving the boat moored here at Tipton ready for next weeks gathering at Park Head.

Blossom
Posted by Blossom at 13:13