(12-14 Sept) Went down to Alvecote on the Wednesday evening and had a night in the Bulls Head, Polesworth with Lawrence Williams.  Headed off at about 9.00am the next morning and were soon making the turn at Fazeley Junction and a little bit later stopping momentarily for a photo shoot at Dawn's favourite 'Folly Bridge'. 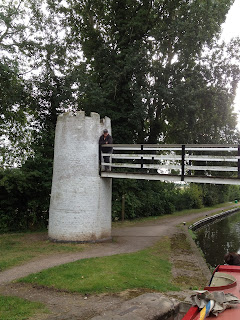 We pushed on up Curdworth and Minworth and were having a really good run until we reached Aston (The lousey ‘leven).  Once again the bottom pounds were all down, as they had been a couple of weeks ago when Martin got stuck with Kestrel.  We pulled out of lock 10 and bumped over the cill as we came out with the pound about 18” down.  We rock and rolled all up the pound bouncing from one pile of bricks to another and got to within a boats length of lock 9 and that was it, we were solid.  I managed to push the bows over to the towpath and jump off to run some water down.  I told Dawn to feel for any movement and then put the power on.  It was about half hour later when the boat started to move and finally go into the lock.  This now meant we were suffering with lack of water up the rest of the flight.  By the time we got to the top of the flight and Aston Junction it was starting to get dark.  Dawn did not want to tie here so we decided to push on up the Old Thirteen and tie at old turn, which we did at about 10.30pm.  As we were coming up the flight we started to have a few problems with the headlight.  Every time I nudged the top cill with the bows, it went out or flickered.  I tried the usual of tapping the headlight or moving the wires about but it had no affect but when the boat bumped again it came back on and so we came up the flight with the light going off and coming on all the way up.  We headed off the next morning, and after the problems of the Aston pounds we had a great trip round the old Main Line 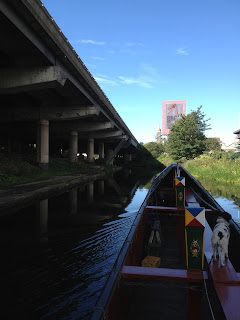 up Smethwick and round through Oldbury where ther’s plenty of water, flew through Netherton tunnel again, which I have said before on my blog, I love going through here, wide, deep and flat out! 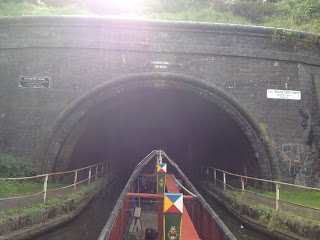 On arrival at Windmill End we moored in our usual spot on the tunnel pound.  I went over to the ‘harbourmaster’ to check we were in the right mooring, then returned to Darley and cleaned all the brasses.  As always a very enjoyable show with plenty of public about, talking about the boat, good selection of ales in the beer tent with entertainment both Friday and Saturday night.  My only comment about this show is the fact that the working boats are spread all over the place, unlike many other shows where they keep them all together.  Left Windmill End on the Sunday afternoon and ran back round to the Black Country Museum accompanied by Chris Shenton, who we were giving a lift back home after we had moored at Tipton. 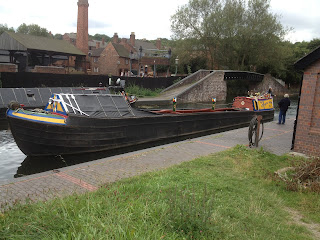 Our little diversion round to the museum was to empty toilets, rubbish and fill cans with water then back to the secure moorings at Tipton ready for next weeks show, and till then,
don't bang 'em about.

Blossom
Posted by Blossom at 11:03