Left the boat at Norbury for the next few weeks and just popped up each weekend to do a few jobs and have the occasional drink with friends. 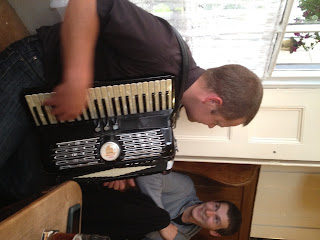 Oops sorry but this image won't rotate.
Such as on Saturday 30th Darley, Tench and Canis Major headed off up to the Anchor for the night where we were entertained by Dave Ray on accordion, Mal Edwards and Barny Ball on guitars and a good old fashioned night was had. 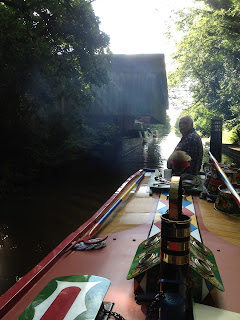 The following Saturday we moved Darley up to the old Cadbury factory at Knighton and arranged to meet Dave Ray in the Habberdashers Arms, just half a mile walk from the canal (your ‘avvin a laugh Dave!) 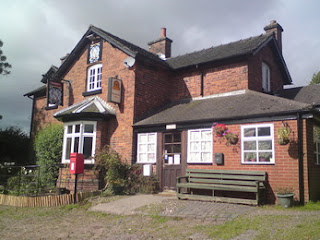 The 'Dashers' as it is known, is a fascinating unspoilt country pub which boasts a collection of over 50 old oil lamps and on some nights they switch off the electrics and have the pub iluminated by oil lamps only. 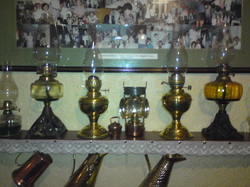 The following day (8.07.12) we set off on the short journey to Audlem for the following weekend’s Transport festival.  We tied up on the offside opposite Audlem Mill then loaded our bits and pieces in the car and headed home.  By the Thursday we were back on the boat at Audlem and were most disappointed to find out that Henry and Phyllis were not going to make it as Cactus had broke down and been took back to Weston.  First thing we did was to take Darley down to wind below the bottom lock.  On returning we breasted up on the outside of Whitby as the offside towpath was very muddy where we had been tied.  Friday night a whole crowd of us booked in at The Bridge for Friday Night fish and chips and had a pleasant evening chatting.  Saturday was spent cleaning brasses , inside and out, the Saturday evening we had a skittles completion.  We had bought a set of wooden garden skittles some time ago and never used them so I laid the top planks along the centre of the hold against the stands/mast and set up a skittles alley.  And so Dawn & I, Cornish Mick and Julie, Chris Shenton and Johnny Brookes set about having a good time.  Due to the shuts not all being perfectly level, occasionally a wooden ball would launch itself and become airborne. Cornish Mick took one of Dawn’s large sauce pans and put it on his head for protection. 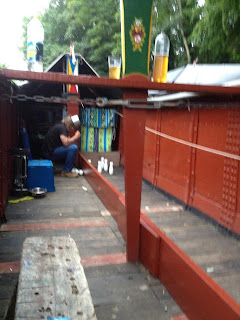 Sunday, we wandered into the town and visited the chippy then sat on the grass banks surrounding the field being used for the vehicle parade of about 200 vehicles.  The rain held off for most of the day with odd showers in between so overall the week end was a good one.  On the Sunday tea time we left Audlem and made our way to the top of the flight assisted by a waterways volunteer then carried on up Adderley and ending up tying up at about 10.00pm at Market Drayton, only to find that by the time we had a quick wash and change, the pub was shut at 10.30pm. so an early night was on the cards.  The following day(31.07.12) we got as far as Radford bank and a carvery at the pub of the same name then on the Tuesday we finally got back to our moorings at Great Haywood.  As we were tidying up Darley and loading the car, a scaffold wagon arrived with over 100 old scaffold boards for me to replace Darleys the mooring, but thats another story, so till then,
Don’t bang ‘em about.
Blossom.
Posted by Blossom at 13:44