A ROUND UP OF THE RALLIES

Too much been going on over the last few months and have not been at home much to blog so here it is all in one over the next couple of nights.

1 WATER WATER EVERYWHERE AND HAD A LOT TO DRINK.
Once again we had a cracking time up at Etruria despite the weather, Which has put me in mind of the Stanley Holloway monologue “three ha’pence a foot”
Well it rained and it rained for a fortnight, The water rose hour by hour
Till the only dry land were at Blackpool, and that was on top of the tower
So Sam started swimming to Blackpool, it took him best part of a week
When he got there his clothes were wet through, and his boots had started to leak.
Straight after finishing work on Wednesday we got down to the moorings at about 6.00pm and headed straight off after loading all our bits and bobs.  A clear run saw us tying up just below Star lock by 9.30pm and sitting down for a drink with friends in the bar of the Star.  We did not have too much to drink for I wanted to make an early start the following morning, much to Dawn’s annoyance.  This was mainly due to the fact that when we went past Weston, Malcolm Braine was outside in his yard and in the passing conversation he said that there were already quite a few boats already at Etruria, so not wishing to end up moored away from the main site, I decided to make an early start, I told Dawn she could lie in if she wanted.  By 5.00am I was up and off through the Stone flight followed by the Meaford flight of locks, Dawn’s head appeared above the hatches as Darley rose in the lock from top coming out to help me through the last lock.  We pushed on through the day and the rain, to arrive at Etruria by late Thursday morning having squeezed under the low bridge at the bottom of Stoke by a couple of inches.  We winded and tied up next to Cactus just up from the museum entrance, brilliant. 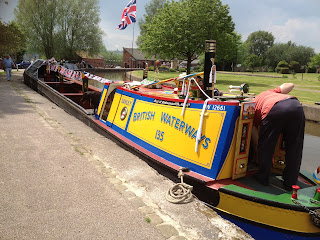 I don’t know what Malcolm was on about as we were the only two working boats there.  Over the next couple of days we were to be joined by many others making just short of 20 altogether including Darley, Cactus, Sweden, Tench, Ibex, Ilford, Elizabeth, Linsey, Keppel, Python, Victory, Swallow Scorpio, Skylark, Alton, Monarch, Whitby, Marquis.  The rest of the day we relaxed as by now the rain had mainly stopped and things were drying out, including me and Dawn.  Thursday night, as it was our wedding anniversary, I took Dawn out for a drink and a meal!  We walked down the road for 5 minutes to the Shoulder of Mutton in Sun Street (which Phyllis insisted on calling the Leg of Lamb!) which had only opened up that afternoon after being closed down 12 months ago.  They did not do meals but had put on a free buffet for their opening which was served just as we all got there and so Dawn and I, Henry and Phyllis Johnson and Johnny Brooks filled our plates and had ourselves a real good night with a DJ playing music and Karaoke and a pub full of characters and atmosphere. Friday was spent cleaning brasses, not, it poured down all day so all the inside brasses were polished and the outside brasses done in between the rain.  Friday night and it was all in the beer tent for fish and chips and a good old natter.  Saturday, and the first day of the show, saw us mainly in sunshine all day although I had some sport with unsuspecting members of the public and a water pistol!  The number of visitors for this show was down on previous years but I put that down to weather and the Queen’s Jubilee and lots of other things going on. Saturday evening and it was back to the beer tent for an Indian buffet and musical entertainment and singing from Jim Macdonald off Elizabeth.  Sunday and it rained and rained.  We joined the historic boat parade at 12.30 up to China Garden where everyone winded and returned to the rally site, except us as we carried straight on up to Middlewich.  The parade was led by Cactus and on the back end boards of Keppel was a look-a-like queen dressed in crimson robes and gold crown, regally waving as she passed.  In just over an hour we were arriving at Harecastle and as we pulled over to the tunnel moorings the BW chap came out and waved us on, perfect timing and we were off into the darkness.  By tea time we were tying up at Hasall Green after spending the day in pouring rain (apart from under Harecastle) and as Dawn said,  “we could not have got any wetter if we’d jumped in the cut!” washed, shaved, dressed in dry clothes we set off up the lane for a wonderful Sunday lunch carvery at the Romping Donkey.  It was closed, in fact it was half demolished, so starving hungry we made our way back to the boats.  When we got back to the boat, Dawn remembered that there was a ‘bistro’ called lock 57 down at the next lock so off we went again along the tow path.  Once again our hopes and appetites were dashed as this was closed for the bank holiday and so we trudged back along the towpath to the boat.  By this time we were once again wet and still hungry.  A rummage through the boxes under the cratch saw us sporting potatoes and a large tin of chilli and so it was gypsy chips and chilli for our meal and then in bed for 10.30pm.  Monday and we had a steady run down to Middlewich in reasonably fair weather until we got quite close and then the black clouds rolled in. 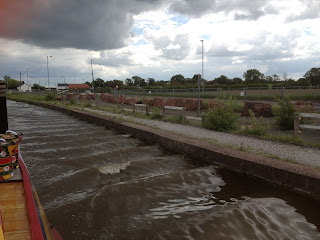 On arrival we just tied Darley up down on town wharf, loaded the car with boxes, dirty washing and dogs and headed off home.  We were leaving the boat at Middlewich for the week ready for next week’s Folk & Boats festival and tomorrow we are off to a Jubilee party with a Wild West theme so we will see what that brings, but until then
Don’t bang ‘em about
Blossom.
Posted by Blossom at 13:46